Mt. Fort Awesome is a mountain on Piggy Island and the home of the birds. Its first canonical appearance was in Angry Birds: Yo, King Pig! Why'd You Kill Our Garbage?!!. It was a track in Angry Birds Go! 2. It was taken over by Mario in Angry Birds RPG: King Pig's Inside Story. However, the first inhabitants weren't the birds, but King Pig when he was Colonel Monster. The inspiration for Mt. Fort Awesome was Secret Mountain Fort Awesome and pretty obviously was so. So called "inspiration" when SMFA failed miserably.

A bed in the Bed Chamber.

One of the bathrooms. 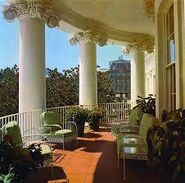 The racetrack in Angry Birds Go! 2.

Mt. Fort Awesome itself.
Add a photo to this gallery
Retrieved from "https://angrybirdsfan.fandom.com/wiki/Mt._Fort_Awesome?oldid=9301"
Community content is available under CC-BY-SA unless otherwise noted.